It was finally time I got off my butt and took the test to get my ticket.  I’ve been wanting to get my amateur radio operators license since I was about 13 or 14 years old, I decided I might as well grab the No Nonsense Study Guides from KB6NU and go for it.

Using only his guides, I studied for about a week for the Technician class test and really wanted to test for my General as well on the same day.  Fast forward to the night before my test and I realized I never got around to studying for the General… I spent about 30 minutes studying the guide that night and about 2 hours studying it in the morning and went to take both tests.

August 9, 2014, I show up and took both the Technician and General tests … AND PASSED!

To say I was excited would be an understatement.  I had already ordered a radio on amazon, a Baofeng BF-F8+ and one from Ebay, a Kenwood TS-440SAT.  I figured this way I had both the UHF/VHF and HF covered.  The BF-F8+ arrived prior to my test so I was able to tune in to a couple local repeaters and listen to some rag chew.  My TS-440SAT arrived a few days after I passed the test and the same day my call sign showed up in the FCC database! 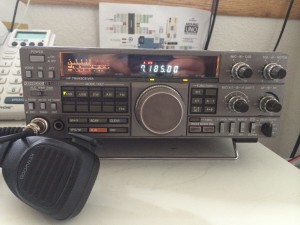 Currently I have a G5RV strung up in the trees (temporary placement until the tower is up) with the ladder line connected to about 100′ of LMR-400 running into the house and get fairly decent reception with no balun (planning on adding one to see if it’s better).

Anyway, I decided to start a blog to outline my trial, tribulations and adventures in ham radio so I hope you enjoy reading this as much as I enjoy writing and experiencing it!

Iconic One Theme | Powered by Wordpress